Mother Ukers at the Ukulele Festival of Great Britain.

After 4 years of attending the Ukulele Festival Of Great Britain as a stallholder working along side Boss Rob, it was time for my first appearance as a performer. 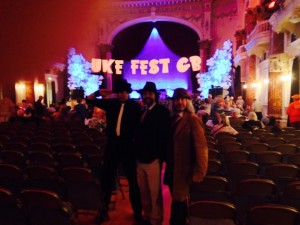 One hour to showtime.

My band the Mother Ukers had been asked to perform for twenty minutes at 2.30pm. It was strange being there and not working on the stall, but great to see the whole thing in another perspective. It really is well run show, you always know where you need to be and what you need to be doing. The backstage crew, monitor engineers and front of house were extremely professional and friendly. 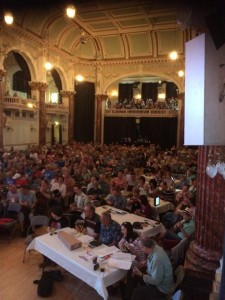 We went on just after the grand opening featuring some Hawaiian songs performed by the organisers which warmed the capacity crowd up nicely. The set passed in a blink of an eye, we managed to play six songs instead of the four we anticipated and received great applause from an eager audience. It was a real honour to perform on such a prestige’s line-up. 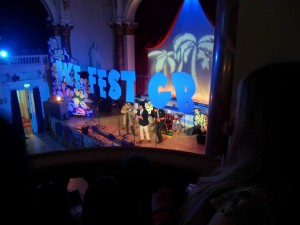 On stage view from balcony.

We spent a couple of hours afterwards chatting and catching up with old friends and some new, this has got to be one of my favorite parts of these festival whether it's representing SUS or the Mother Ukers. Unfortunately 4pm came way to quickly and we had to jump back in our time machine (Honda Accord) and head off into the future for our next gig.

Our brand new Kanile'a Manako T-shirt is available now to Pre-order. We all love a bit of merch! You can check it out here...
Read More»