High D Baritone Tuning and Baritone GCEA - What keeps me awake at night?

Perhaps the title is a bit dramatic? I am celebrating 8 years of working at a Ukulele shop this month and it amazes me the amount of solutions and gaps in the market that have been filled either by us or other people looking to find their place in the Ukulele world.

For example, it used to be impossible to find a Spruce top Ukulele, Kala were the only people making a Ukulele bass and they only did the one type. Getting a new Hawaiian/Japanese/Mainland USA made Ukulele was unheard of without getting on a plane and if children learnt an instrument in school it would have still been a recorder and most kids wouldn't know what a Ukulele is. 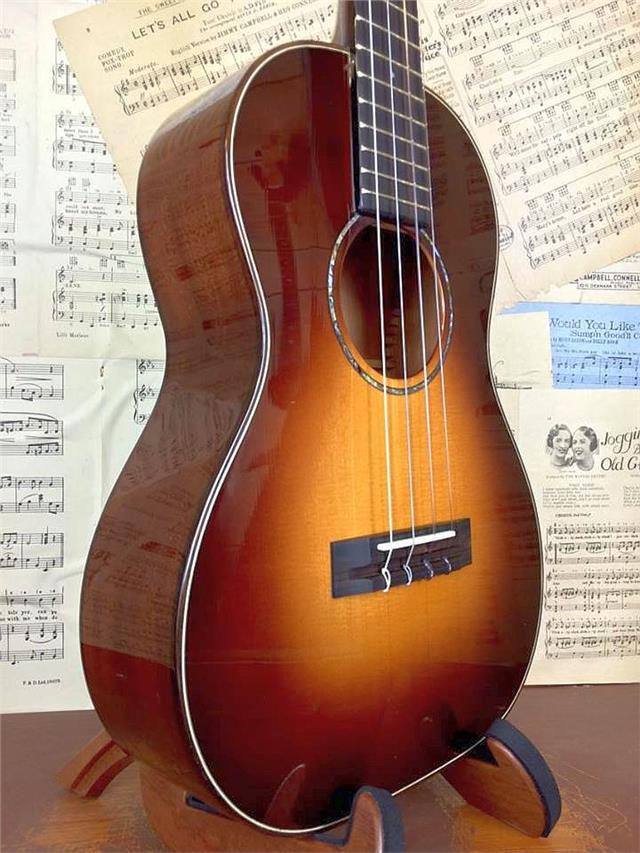 (Pictured above - A Spruce top Baritone with a cool sunburst by Pono. Unthinkable here in the UK 10 years ago)

So I guess things progress as the general public’s influence and interests increase and as retailers and musicians we also adapt to survive and thankfully as lovers of the Ukulele we thrive as we learn to meet those interests. A couple of years back, I would get several emails a week from customers that had purchased Baritone Ukuleles but were really keen to have them strung up GCEA with a Low G. Now I am not a Baritone player but this seems to me like a logical choice. Make use of the extra depth of sound from your Baritone's larger body by fitting a string that explores the lower octave. And yet! - Nobody manufactured this set of ukulele strings and seemingly still don't. I contacted our reps for Aquila, Martin and more recently D'Addario who all politely indicated that it was a bit too niche to make manufacturing costs make sense.

So what we did was play around with several gauges of single strings until we found what we felt was the best fit and bundled that string in with the standard set of High G GCEA strings manufactured by Aquila. In two years we have sold more 200 sets and I regularly sell out of the single strings before I even notice we are running out. (Perhaps that says more about my poor stock management skills than it does about the sets popularity? Maybe, Maybe not?)

So I was thinking - right problem solved lets move on. Until I began receiving more emails and phone calls from customers asking for a set of High D Baritone Tuning strings. This too seems like a logical choice to me and one that should be more readily available. Using a High D is going to completely differentiate the sound of the Baritone Ukulele from the Guitar yet Somehow, the manufacturing trend is and always has been to produce sets in Low D tuning for Baritone Ukuleles.

I have come across dozens of players in the shop over the years that play around with single classical guitar strings to acheive High D tuning and even more people that are crazy enough to buy two sets of strings each time they restring a Ukulele so that they can pinch the .028 gauge E string to use as a D. A couple of manufacturers were bringing Ukuleles in accidentally strung High D from the factory which interested me until I tuned one of these Ukuleles up and realised that the strings on the Uke were the Baritone GCEA Aquila strings I mentioned earlier and they practically hung off of the fretboard when tuned down to DGBE.

Over the past few weeks I have experimented with several different gauges of string to try and find the most balanced tension. Eventually I settled on a High tension .028 D'addario Titanium Classical Guitar string which is just a little bit tighter on the neck than the E string at the opposite end of the fretboard and honestly - we are all delighted to finally have a solution for all of our customers.

I got Adam to film a little video for you of him trying these strings out on a Pono.

I hope you like it? If it sounds like a fix for your Ukulele then you can order them at the link below

During these experiments with different strings I grew to appreciate the Baritone Ukulele a lot more. Ukulelemag published a great article about the birth of the Baritone which is definitely worth a read!

So the question is - What next? Is the next trend going to be for Baritone Ukuleles that have four wound strings or ones that can be tuned ADF#B? I hope not..

Our brand new Kanile'a Manako T-shirt is available now to Pre-order. We all love a bit of merch! You can check it out here...
Read More»