Living or dying by the sword of Aquila!

This entry was posted on February 6, 2015 by adminuku.

So many different types of Aquila! What do they all do?

It is very easy to google ukulele strings and read 'Monofilliment' this and 'super nylgut' that. Hopefully this post will go back to basics and just tell you what effect each string has on the sound of an instrument, how they feel on your fingers, whether they are even suitable for you. Any questions I leave unanswered please post in the comment section and I will try my best to help. I have decided not to talk about some of the really obscure Aquila products but I highly recommend the real gut Banjo ukulele strings if you want an authentic 1920's sound.

AQUILA NYLGUT STRINGS (the white ones) 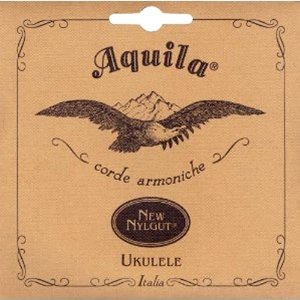 I have been working with ukuleles for six years and I think the most frequently asked question from a beginner is whether the ukulele comes with Aquila strings. The answer nowadays is almost always yes. As I touched on in my last blog - Aquila Nylgut strings can greatly improve the sound and intonation of a cheaper laminate ukulele and as the ukulele grew into a much larger hot topic of Internet forum conversation, that tip became the worst kept ukulele secret to the consumer long before it became important for the manufacturers.

Not so long ago, your average ukulele retailing under £50 would have come with some very generic black or clear nylon strings fitted. These strings are pretty toneless and loose fitting and do nothing to enhance a poor instrument.

That doesn't appear to be the case anymore as even our cheaper Brunswick BU1S ukuleles and the Octopus range come with Aquila strings fitted as standard. Such is Aquila's popularity that about 18 months ago we discovered a lot of the ukuleles we had coming into stock were being fitted with fake Aquila's. If you buy a ukulele and the strings are brilliant white and the string tag says made in China, be wary. This isn't really a problem now but hopefully you get where I am coming from.

So when would you want to order Aquila strings and what effect would they have?

Standard Aquila Nylgut are a milky white/clear colour and the texture is a really difficult to describe combination of smooth plastic and a slight uneveness like a real gut string. I suppose that is what to expect from a synthetic gut string. Customers who don't start with them often feel like they are harder to fret than nylon strings but I think that completely depends on the person.

If I may be controversial for a moment I would warn anyone with an intermediate or high end instrument that Aquila may create nasty buzzes on the fretboard and poor intonation on the thicker strings. If I knew why I would work for Aquila. You have to admit that it is interesting that the very attribute that make Aquila appeal to the beginners market can create issues for the longterm players.

BUT KANILE'A USE AQUILA SO THEY MUST BE GOOD ON HIGH END UKULELES?

I wondered for years why Kanile'a ukuleles used Aquila. For several years it seemed like we would be restringing every Kanile'a we sold with Worths, Fremonts or some Daddario combination.

I asked Joe Souza when he visited SUS last summer and he said that they used Aquila for two reasons;

1. It was pretty neat to be the only ukulele company on the island with white strings.

2. Aquila strings on Kanile'a are a unique formula that is constantly being improved as the two companies better understand what works for each other.

I think that the Aquila's used on Kanile'a ukuleles is actually a lot more similar to Aquila's newer Super Nylgut brand.

In conclusion, Aquila Nylgut strings have an important place in the market. You should probably make sure you have them on your first ukulele and they will be a solid 'go too' string on anything not made in Hawaii, Japan or by a luthier.

AQUILA RED SERIES (the red one) 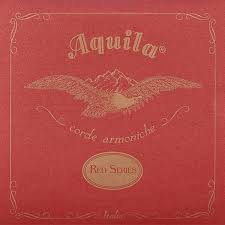 The Aquila red series strings are a completely different animal to the Nylgut strings. The reds sound very mellow and the gauges appear to be manufactured much more consistently. A lot of the tenor ukulele players that play Jazz like them because they have a darkness and soft fade to the sound.

The red ukulele strings have a rough almost hairy feeling texture to them. It is also a massive advantage that they produce an excellent unwound low G string for all sizes. The only issue with these strings is that they seem to be a lot more prone to snapping than any other string on the market.

Why and how strings snap is another argument for a different day but my understanding of it is that some people break lots of strings and some people never break them. If you are heavy handed or play your ukulele with untrimmed nails then I think that the Aquila Reds will be something you try once and then swear never again. I can reassure you that it isn't you, it's the string having a lovers tiff with the ukulele. On the flipside, if you do not break strings these may well become your secret weapon. 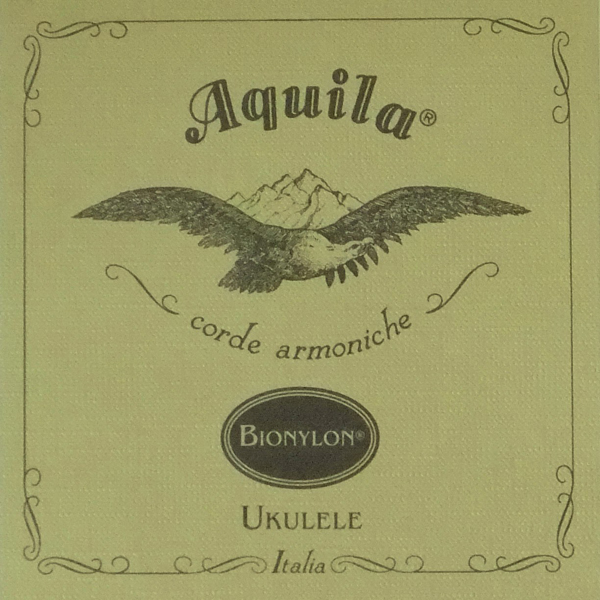 The Bio Nylon strings are possibly the most unusual Aquila string. They are manufactured in a much more environmentally friendly way than other strings. Aside from that I don't really have much nice to say about them. They are a lot more mellow and warmer than Nylgut strings but they take a very long time to bed in after being fitted to a ukulele and when we sold them it felt like the world universally avoided them like the plague.

The texture on these strings is like the normal Nylgut strings but a slightly lighter feel. I think the lighter gauge explains how they achieve a mellower tone.

They are by no means a bad string but they are not quite different enough from other cheap strings on the market to be considered superior to anything else available. If you think I am wrong, please share your own thoughts in the comments.

AQUILA SUPER NYLGUT SERIES (the other white one) 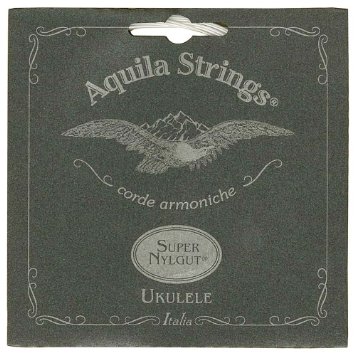 These strings are very new to the UK market but we have been really impressed with them so far. They look white and slightly yellower than the normal Aquila strings. As I touched on earlier, I think these strings are a slightly improved recipe on Aquila's signature Nylgut string. They work and sound almost the same as normal Nylgut strings but on solid wood instruments they provide an almost intangible improvement.

They work on solid instruments better than Aquila's traditionally would but I am buggered if I can figure out why and how! It must be the pixie dust they sprinkle on them before they leave the factory.

Back when I first started at the shop, Aquila changed something about the Nylgut string and for a long time customers complained that the old strings were better than the new ones. I think the Super Nylgut is the first Aquila string since then to bring players back to the brand. It’s a bit like in the 1980's when Coca Cola tried bringing out New Coke - It made people want the old product more.

You can tell that Aquila pay a lot of attention to the gauges on the Super Nylgut strings. Only time will tell if these strings can become as popular as they deserve to be. For what it’s worth, I would use them on my ukuleles and I can be a bit of a snob about strings.

AQUILA LAVA SERIES (the black one) 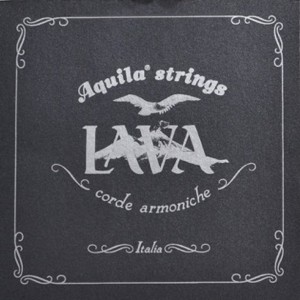 These strings have only been available for about four weeks but my colleagues and I have put them on several different ukuleles on the shop floor in an effort to form our own opinion on them. They use mother of pearl to dye the strings black. The dye gives these strings quite a unique elastic/plastic feel that you don't get on the other Aquilas.

These strings sound much better on solid wood instruments than the cheaper ukuleles. Having said that, I think they are probably best used as an alternative to the normal Nylgut string if you don't want a white string on your ukulele. 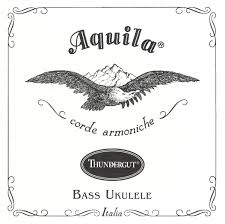 Aquila do a variety of ukulele bass strings too. The Thundergut is the familiar Aquila white colour and is by far the most popular string we sell for ukulele basses. The benefits of this string far outweigh the negatives as we have found this string can be a real problem solver for a variety of different issues. The tighter gauge improves the intonation and the feel making it more of a natural play and fit for existing bass players. If you don't mind the colour then give these a try on your Ubass. Tonally, the Thunderguts make the bass about 20% louder unplugged and sound fairly even across all of the strings

The Red bass strings are my personal favourite. They are still a tight fitting gauge like the Thunderguts but if you play anything complicated on your Ubass then the reds just slide nicely under your hand. They have a slightly plastic texture but thankfully feel nothing like the Red ukulele strings and touch wood we have never known one to break.

The Rumbler bass is Kala's budget ukulele bass model. The strings that accompany this ukulele became quite popular and took off almost immediately as a string of their own. I equate these strings to being the rockabilly uke bass string. They feel a bit like weed whackers and have a kind of scoop in the mid and treble that you are even going to love or hate.

I have also found these strings to be a bit slippy and oily compared to the other Aquila bass strings. I learnt this the hard way when I tried to pull one tightly through the hole on the top of a Ubass and the string pulled the instrument into my face with a slingshot effect. Don't try that at home as it will make you look a tit in front of your colleagues and spectating customers.

There you go. I bet you didn't think these posts would recount such dangerous ukulele tales!

If you found this blog informative, please share it with any of your ukulele playing friends. As always, feel free to contact me in store with any questions. Finally, if you think you can add to this based on your own experiences with Aquila please comment below.

Until next time.
Alex